So today is Star Wars Day. May the 4th be with you and all that...I love it as Star Wars is one of my all time favourite movies.

It got me thinking about my favourite movies...we see a lot of lists of people's fave movies but most of those lists are full of 'arty' type movies and I think they are rarely an honest 'expose' of what movies people really like. So here is my honest list of my favourite movies of all time. I can't really put them in order as they all have a special place in my heart...some movies are special for the time when you saw them...others are just good fun..still others maybe had some kind of influence on your life.

Now, I am a film producer so my list should be full of obscure movies that no one has heard of right? Well...no. Even though I try to be a 'creative' producer, my tastes are really pretty basic...many times I love a photo or a painting and my more 'creative' colleagues think I am an idiot...so I like things to be 'accessible' and 'fun' I don;t want to think about a movie...I don't want to make a feature that really makes people think. I like movies to be an escape...to let people 'get away' from their own lives for a couple hours and live a complete fantasy. So, with that in mind here is my list of my top ten all time favourite movies.

If you read this I would love to get your opinion on this list and maybe give me your list...but don't be a wanker ok? Be honest and don't be embarrassed if you like a daggy romantic comedy...I have one in my top ten!!!! ;)

1. Star Wars Episode IV, A New Hope. What can I say? This movie blew me away and I have watched it at least once every year since it was released in 1977. I was 17 when it was released and of course I wanted to be Luke Skywalker or Han Solo. Everyone did!  Star Wars has also given us the greatest villain the screen has ever seen...Darth Vader, wow! In 1977 this was state of the art and incredible. I think it still is. 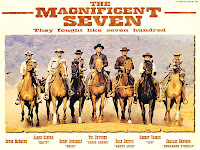 2. The Magnificent Seven. I love cowboy movies. My brother got me into the 'Trinity" movies when I was young and I still love Westerns to this very day...especially the old ones. This was the goodies versus the Baddies and the goodies where not all good either...but what amazing characters. Yul Brenner, Elli Wallach, Steve McQueen, Charles Bronson, Robert Vaughn, James Coburn! What an incredible all star cast. I love this movie. 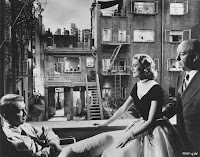 3. Rear Window. To be honest, I like anything by Alfred Hitchcock but as this stars one of my all time great actors in it - James Stewart, this is my favourite.  Grace Kelly is also a babe! Great drama and a very simple shoot. Basically one set...not too expensive for the producers point of view :). I would love to make a movie like this one day. 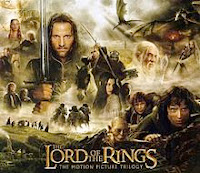 4. Lord Of The Rings Trilogy.  If you ever get a chance to read director Peter Jackson's biography about the making of this film, do it. This is one of the more incredible feats in movie making history. He had so many problems...told most of the big studios to get...lost and still managed to make an incredible series of movies. He filmed them all at the same time in NZ which is also amazing. I know many of the crew who worked on this production and they all speak very highly of Peter Jackson. So with all the studio problems, money issues, making three films all at the same time...PJ still managed to be a great and inspiring leader to all the thousands of crew members. Wow! The movies are incredible and flawless...I mean this is a massive undertaking and it just worked brilliantly! Amazing movies from an amazing director.

5. The Wild Geese. This is just a rip roaring war adventure movie about a bunch of washed up old guys who are called together for one last mission. And what a cast! Roger Moore, Richard Burton, Richard Harris, Hardy Kruger, Stewart Grainger. Fantastic. Just good fun! Why not? 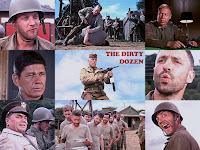 6. The Dirty Dozen. Lee Marvin, Ernest Borgnine, Charles Bronson, Jim Brown, John Cassavetes, George Kennedy, Trini Lopez, Robert Ryan, Telly Savalas, Donald Sutherland, Clint Walker.... every one of them dirty and rotten who are asked to save thier country in return for their freedom. You know...the idea for this movie has been done so many times...but this was one of the first. Great cast...great war movie...beautifully filmed and edited. 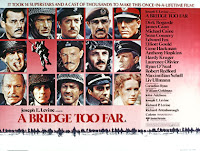 7. A Bridge Too Far. I know I know...another war movie...well, I love war movies, especially when they have a brilliant story, brilliant cast and are directed by Richard Attenborough. This was also written by the greatest screenwriter of all time, William Goldman. Cast includes... Michael Caine, Dirk Bogard, Sean Connery, Ryan O'Neil, Gene Hackman, Donald Pickering, Edward Fox, Anthony Hopkins, James Caan, Colin Farrell (!!!), Hardy Kruger, Liv Ullman, Elliot Gould..take a breath....Ben Cross, Ben Howard, Denholm Elliot, Peter Gordon, Laurence Olivier (!!!!!!!), Robert Redford, John Ratzenburger (Norm from Cheers!),  Michael Graves, Richard Attenborough, Winston Churchill (Uncle Winny to me....), Adolf Hitler (yes the same), Dwight D Eisenhower...you get the picture right? And that is only half the cast...can you imagine how expensive that cast would cost nowadays? Anyway...great picture...true story... and amazing direction.  When I was filming in Holland last year I kept going to all the places in this movie...I was so excited and everyone I was with thought I was stark, raving mad! :) Go see it! 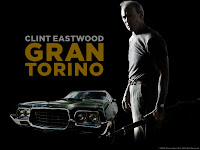 8. Gran Torino. Clint Eastwood directed this movie...he was also the star...he directed himself playing a grumpy old racist war vet who saves the lives of his Korean neighbours after they try to steal his prized car, a '72 Gran Torino. Now Clint is an old guy and to direct and star in a movie of this quality is amazing. He shot it in one month with an unknown cast and man it is an incredible movie. I think Clint's performance in this is one of the best I have ever seen.

9. To Sir With Love. I love this movie. Sidney Poitier is a black high school teacher in a low class English suburb. He has a nightmare with his kids but turns them around and by the end of the movie...they are good kids who have learnt life lessons from thier teacher. Sounds daggy yeah? But this is a superd film. Beautifully directed and amazing performances. 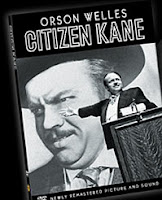 10. Citizen Kane. This movie is amazing today...but it was made in 1941!!!!!  I mean...cameras in those days where so big they could not be moved! But have a look at the camera moves and special effects in this movie...wow. How did they do it? Orson Welles directed and starred in this movie! Great movie and has to be in in everyone's top 10. "Rosebud"...

Special mention to The Godfather, Jaws, Back to the Future, Raiders, most Jack Nicholson films including Easy Rider, The Great Escape, Butch and Sundance, Ghostbusters...yes Ghostbusters,  Bridge on the River Kwai, Lawrence of Arabia, All Monty Python movies especially Holy Grail, Spinal Tap :), Alien, Rocky, Shawshank Redemption, Cuckoos Nest, ET, The other 2 Star Wars movies...the good ones, Vertigo and every film Alfred Hitchcock ever made, all John Wayne movies, To Kill A Mockingbird...I should have put that in...,  and then there is the Blob, Day of the Triffids, Mad Max, Casablanca,  the original Superman with Christopher Reeve, Die Hard, Toy Story, Wizard of Oz I guess....oh you get the picture...

Well there are lots of great movies and there are also lots of crap movies. I can buy movies here in Saigon for one dollar so I have seen a lot of bad movies I can tell you. I might make a list of the worst 10 movies of all time...easy...Titanic, Pearl Harbour and 8 musicals....pick any of them, they are all horrible...ha ha ha.